Oh, General Motors. How your steering columns have problems. Be it loose bolts on your tilt mechanism or crappy ignition cylinders. Luckily, they’re not too difficult to disassemble. The ignition cylinder on my Cherokee has surpassed its lifespan. I have a set of GM tryout keys that I acquired and had to use them to figure out what key my cylinder needed. The only problem is the cylinder is worn out. Every key I tried would turn the cylinder. The Renix era Cherokees weren’t known for their security feature, but at a minimum, I’d like to have just one key start my car. So it’s time to tear into the column and replace the ignition cylinder. 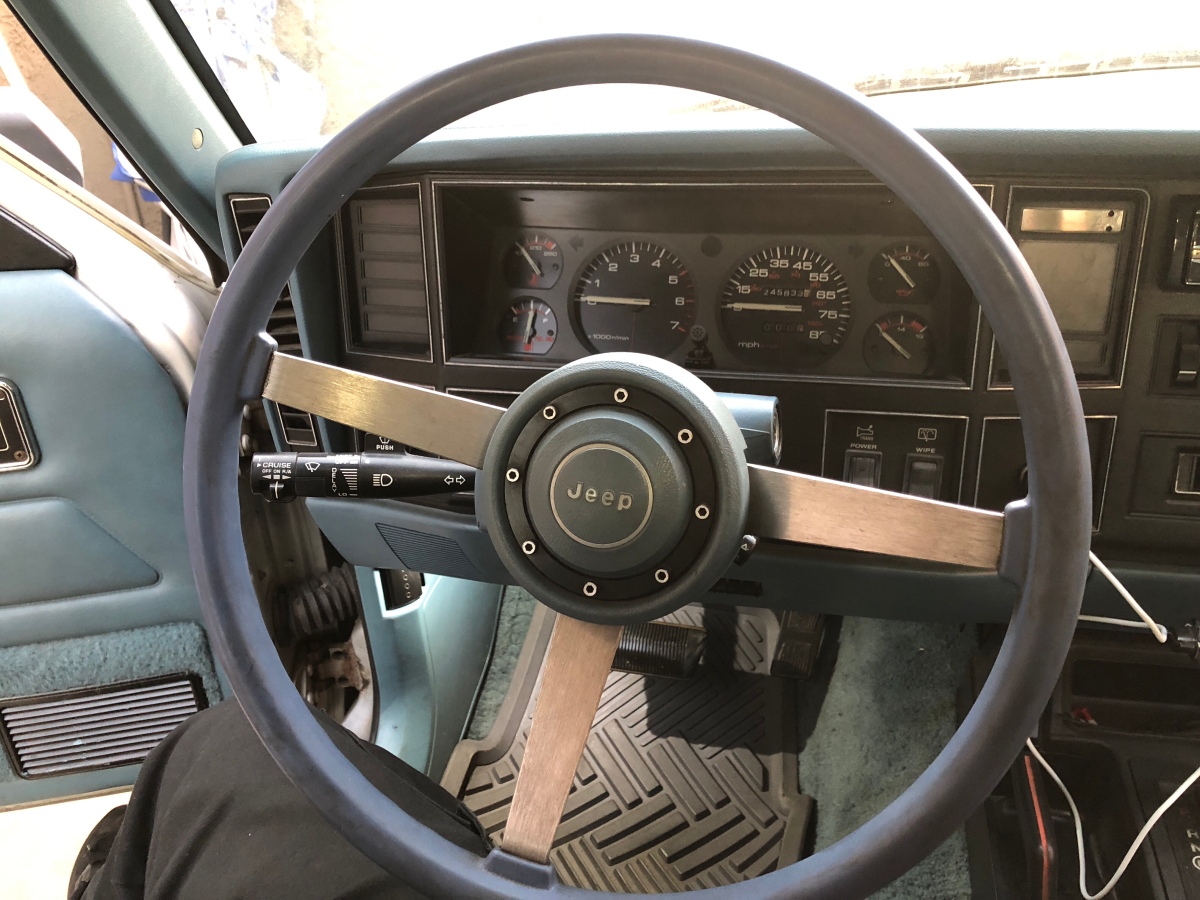 To start, I just pulled the horn button off the steering wheel. I reached around the sides and gently pulled it until it came off.

Once the horn button was off, there were three Philip screws that had to be remove under it. The three screws hold the spring mechanism on top of the steering wheel. I noted the orientation of the opening on the metal ring. This is the reference for installing the horn button in the proper configuration. With that noted, I removed the spring mechanism and stacked them in the same order I took them off. 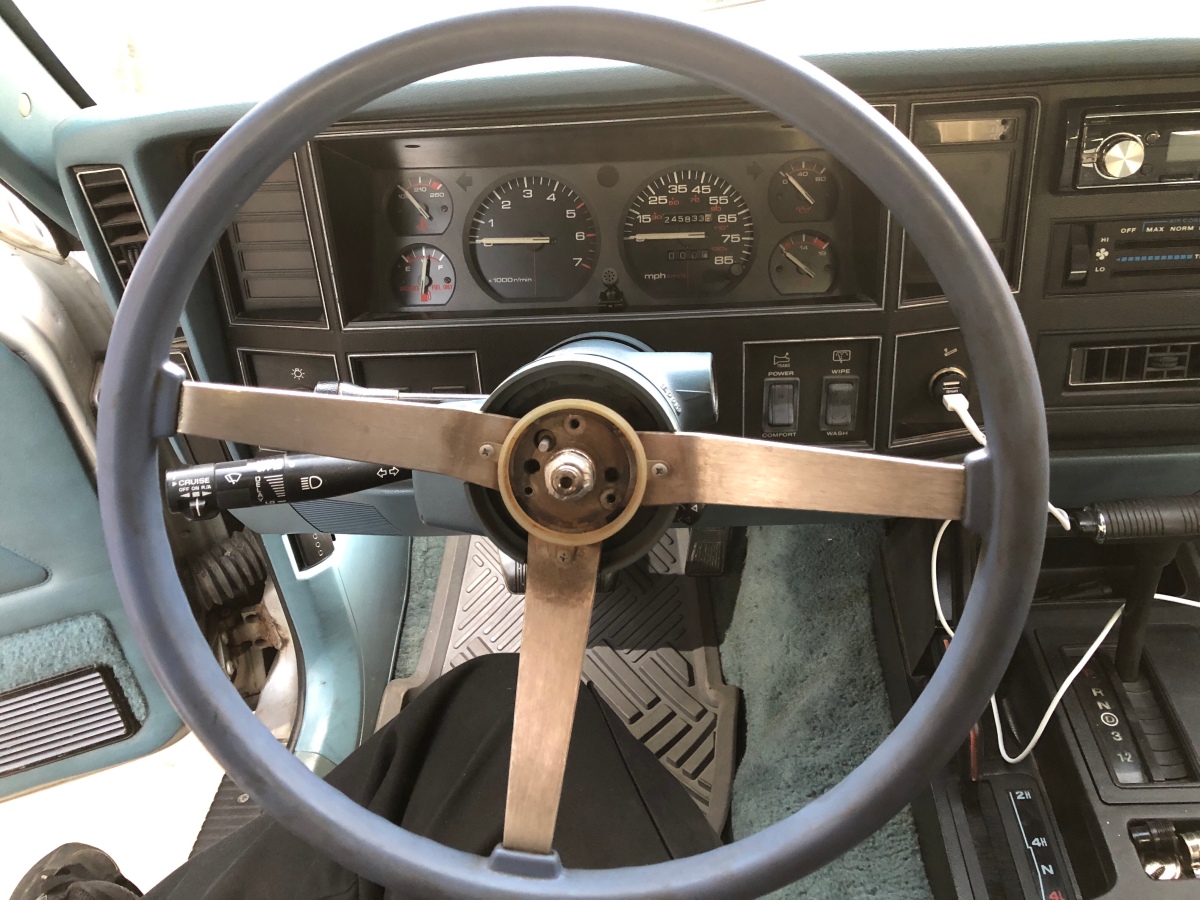 I used a 13/16″ socket to remove the steering wheel nut from the column.

I cranked down the puller until the wheel came off the splines on the column. It’s not on there very deep but does require the puller to remove.

Next, I had to remove the lock plate. This can be a pain in the butt. There is a small retainer ring that needs to be removed in order to lift the lock plate from the column. First you have to take tension off the retainer ring. The Pep Boys kit has a metric and SAE lock plate barrel bolt. I used the SAE barrel bolt along with the “U” bracket, washer and nut. I threaded the barrel bolt on to steering column where the steering wheel nut use to be. Once secure, I put the “U” bracket, washer and nut on the barrel bolt.

I cranked it down a few threads until the lock plate compressed. This is where is get difficult. I used two dental picks to lift the retainer ring from its grove. Easier said then done but it will come out with some strategic manipulation. Or dumb luck. 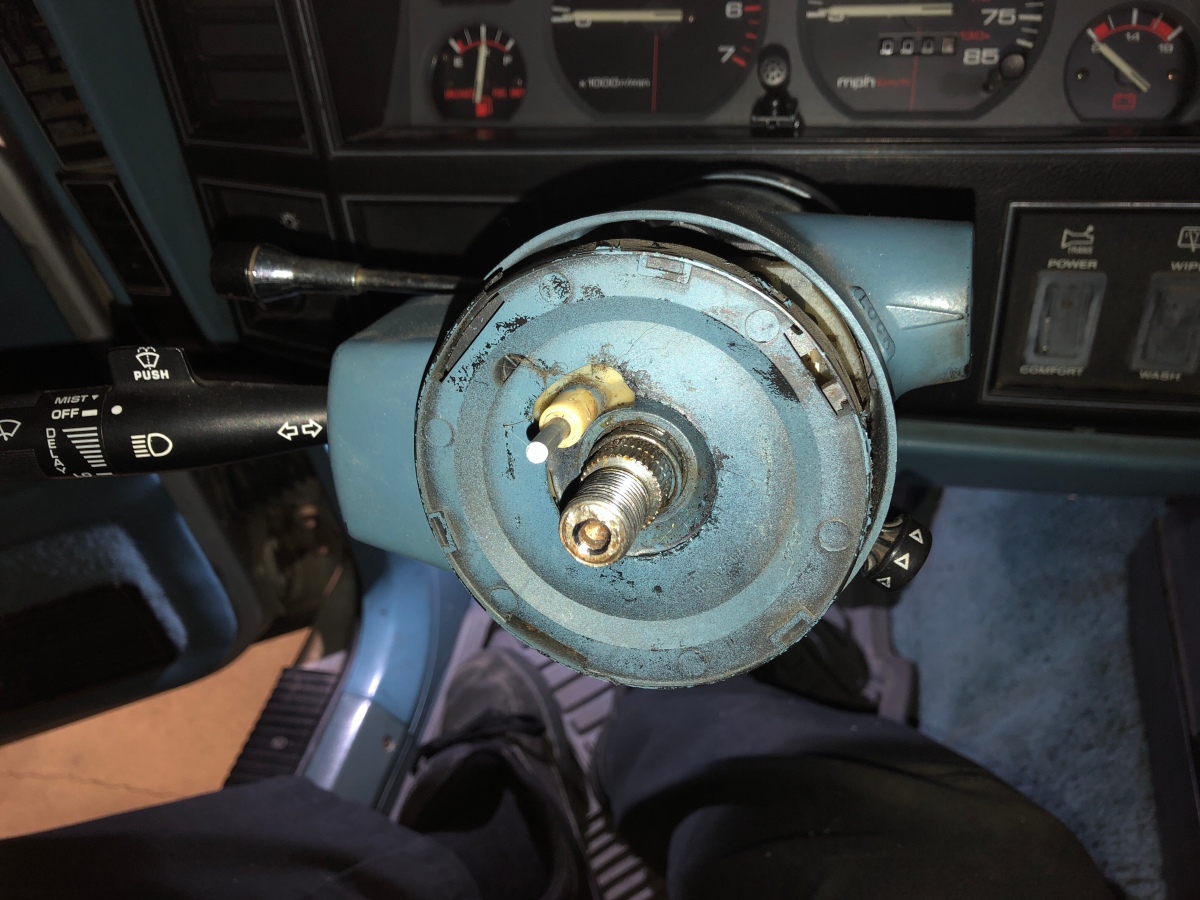 Next there are four screws that need to be remove as well as the turn signal linkage bracket. First, I switched the turn signal to the right turn position to gain access to the top screw. Below are the location of the four screws. I also used a small Philips Screw driver to remove the emergency hazards knob on the side of the column. Once its unscrewed, I just pulled it out. 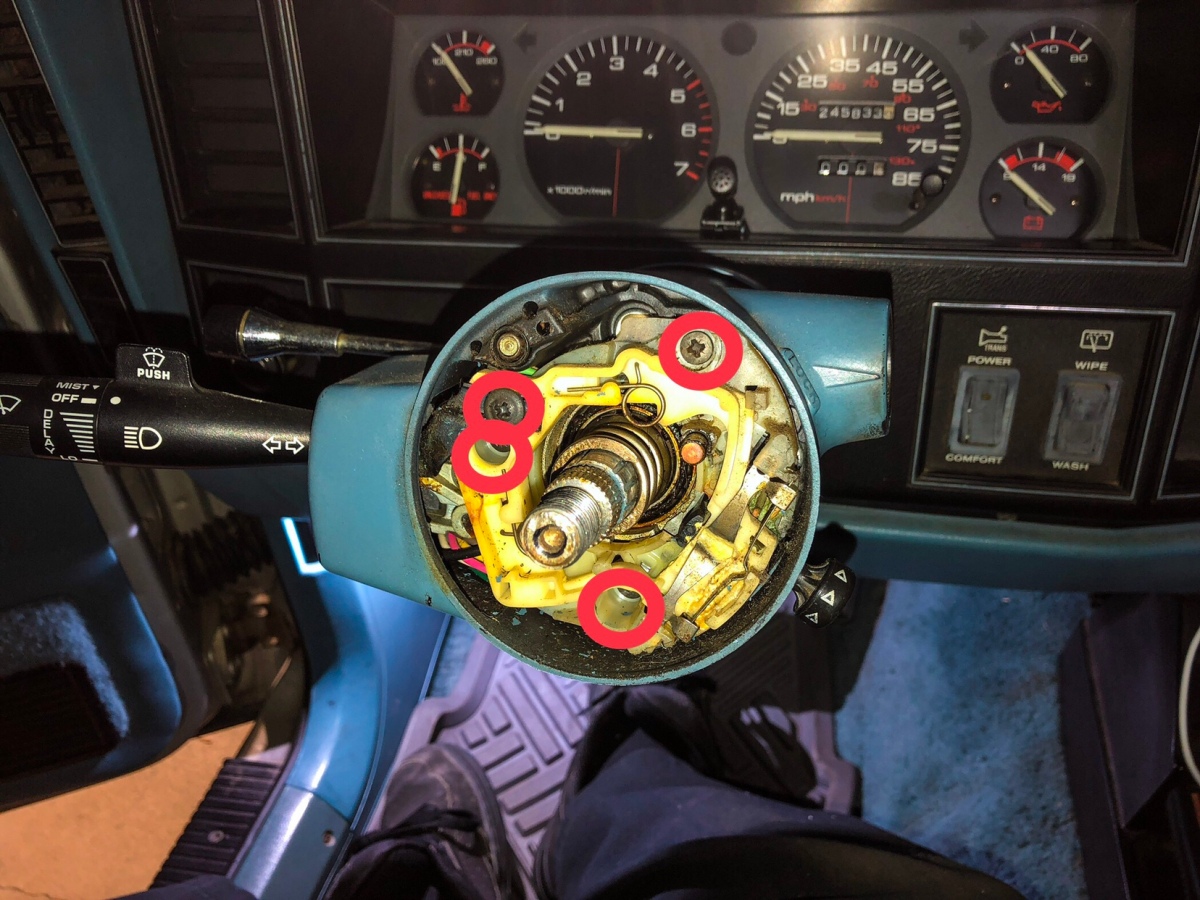 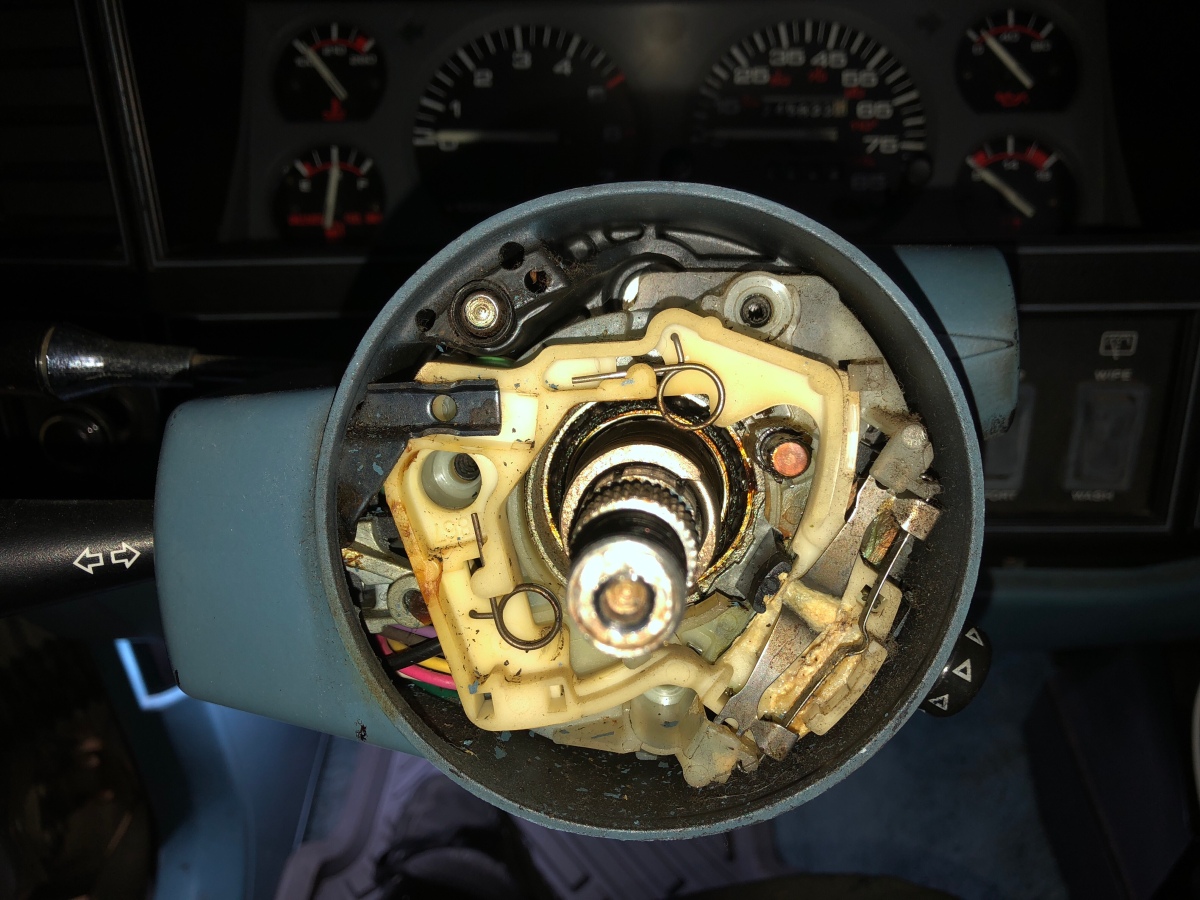 The little black turn signal bracket can be removed by gently finagling it out of its slot. Once it was removed, I gently, and I mean GENLTY, pulled the wiring and turn signal switch up until it would clear the steering shaft. Once it’s off to the side, there is a small contact that can be gently pulled out under the ignition cylinder. 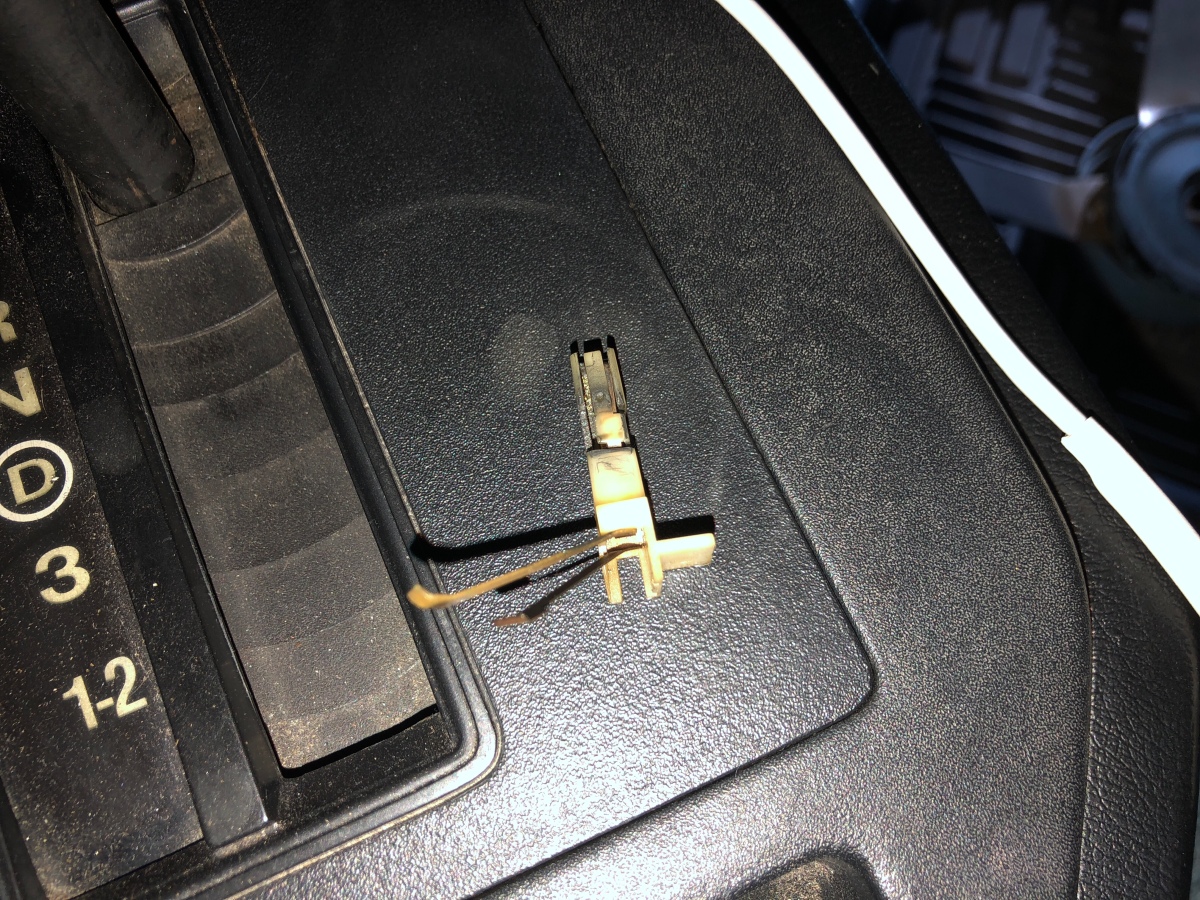 These parts are 30 years old so I took extreme care not to damage them. I’m sure parts are available but why waste the money if I didn’t have to. Now comes the home stretch. The only thing holding the cylinder in now is a black, T-20 Torx bolt under the cylinder. 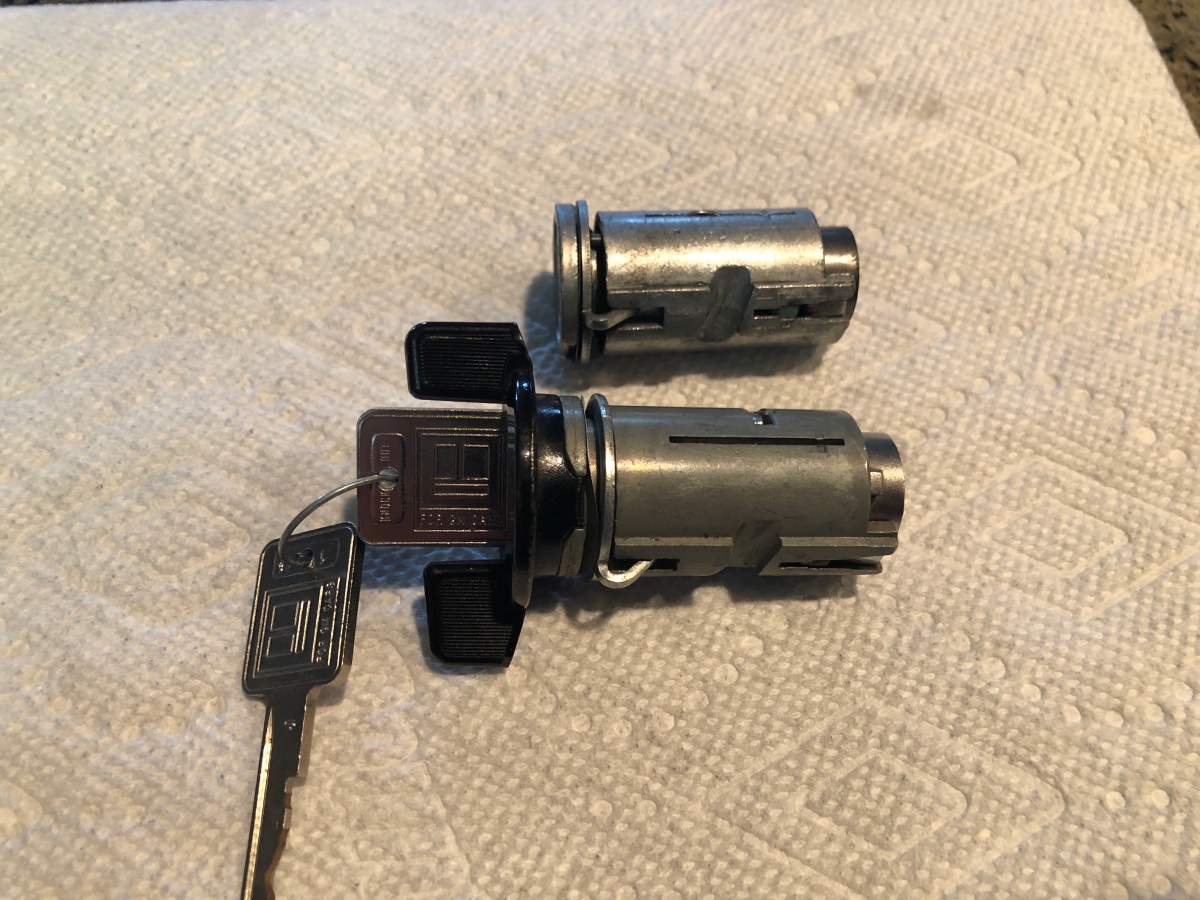 At this point I just slide the new cylinder in and installed everything in the reverse order I removed it. I installed an aftermarket steering wheel I had until I could have my original Jeep wheel reupholstered. I also have plans to do some custom etching on the metal parts of the wheel.

I tested the new cylinder and everything worked perfect. This job is a little intense but isn’t the end of the world. I always recommend replacing it when you purchase a used Jeep just for peace of mind that you have the only keys.